What is Blocklords? And how to earn money playing it Blocklords is set to transform Web3 gaming with its player-driven economy. Find out how to play Blocklords and earn while playing here.

Highly anticipated medieval strategy massively multiplayer online (MMO) game Blocklords is out, unraveling iconic characters, pitched battles and engrossing drama. A genre-defining grand strategy game of MetaKing Studio, Blocklords introduces players to a universe where players’ actions have a bearing on their characters, other players and the medieval world around them.

A captivating multi-player play-to-earn (P2E) game, Blocklords gives players the freedom to play the way they want. It is a distinct world in which the players drive the story, deciding the destiny of their heroes with their playing skills. Blocklords is not only brimming with fun but also enables the players to earn money passively while immersing themselves in nerve-rattling actions like capturing enemy strongholds or winning a round of fencing.

This article reveals information on Blocklords gameplay and how to earn from it, along with a string of other intriguing facts.

The founders, David Johansson and Nicky Li, wanted to create a world in which each player had complete control over their heroes (characters representing players in the game) and could also earn a living while playing. As a play-to-earn crypto game, Blocklords gamifies the process of onboarding new players, creating heroes in line with the attributes they choose.

How to play Blocklords

Blocklords offers a player-driven narrative designed for players of all sorts, enabling them to play the game as they like. In this play-to-earn strategy game, players are empowered to shape the world around them at any level, gain experiences of their choice and own their digital assets.

Related: How will GameFi and P2E blockchain gaming evolve in 2022?

Players start from being a Farmer, go up levels like Knights/Raiders, Lords/Ladies and could eventually become Kings/Queens, the highest level in the game. Whether a player chooses to enjoy the life of a King or Queen or wants to be a simple Farmer, Blocklords rolls out plenty of experiences for them as a unique grand strategy game. Players are free to choose a legacy of their own for their heroes and enjoy gaming the way they want.

Blocklords gameplay has the following components:

Blocklords characters are minted as heroes, digital assets belonging to the user on creation. Heroes feature unique individual stats and traits. As a player progresses in the game, their hero’s character evolves,ultimately determining their path. Gameplay choices available to a player depending on their role. A player’s utility in Blocklords depends on their efforts and in-game skill. 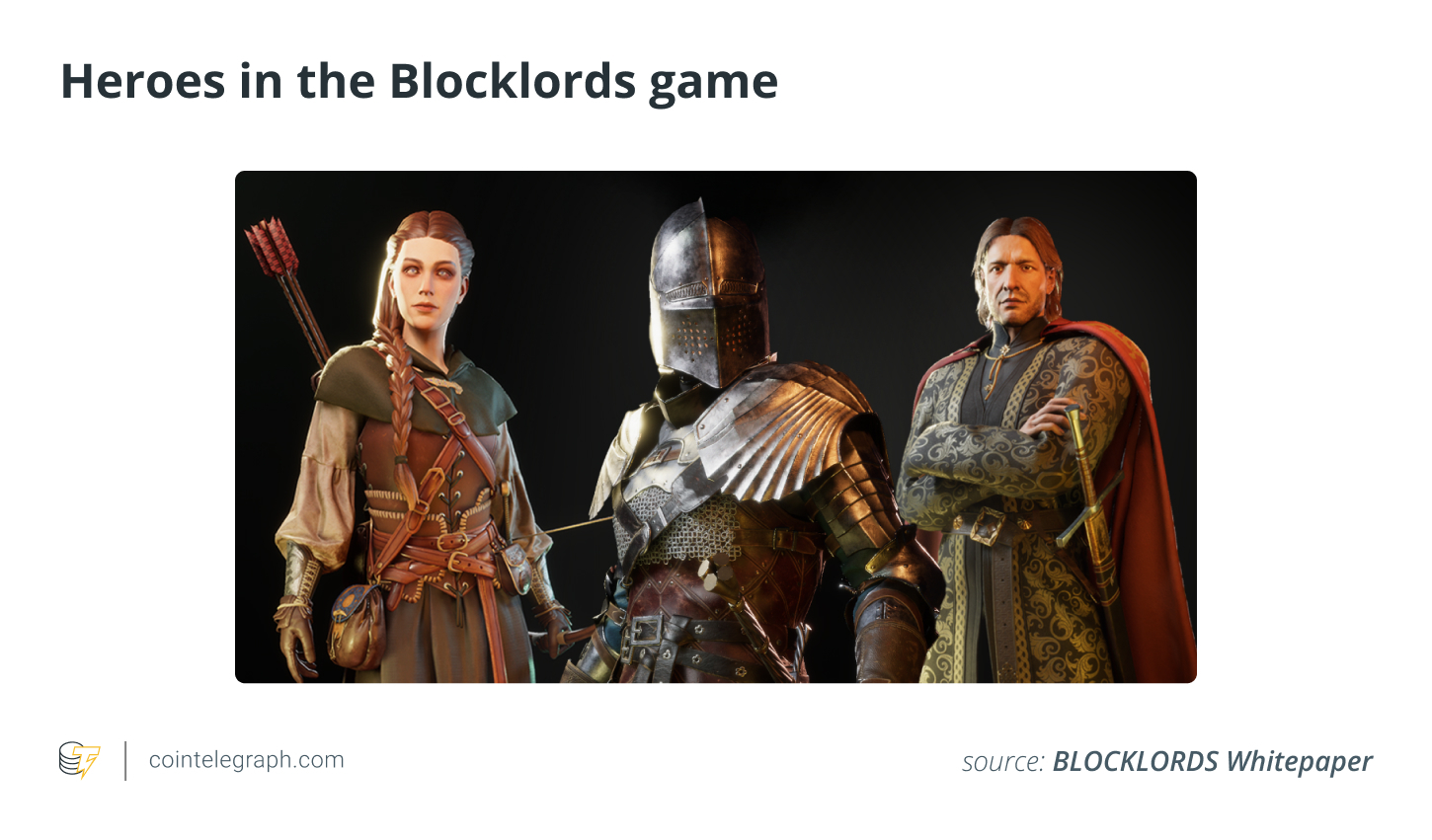 As heroes have a limited lifespan, they must continue their legacy through ancestry. The dynasty feature on Blocklords enables a player to pass on their heroes’ unique traits and attributes to descendants. The feature enables heroes to live on regardless of their fate. The game also allows players to exchange heroes for coveted characters, adding to the thrill.

Blocklords universe requires a steady supply of resources to succeed. This supply is ensured by Farmers who undertake tasks like gathering, mining, processing and crafting different materials to create a currency. When a player joins Blocklords, they begin as a Farmer unless they are someone who owns a character. 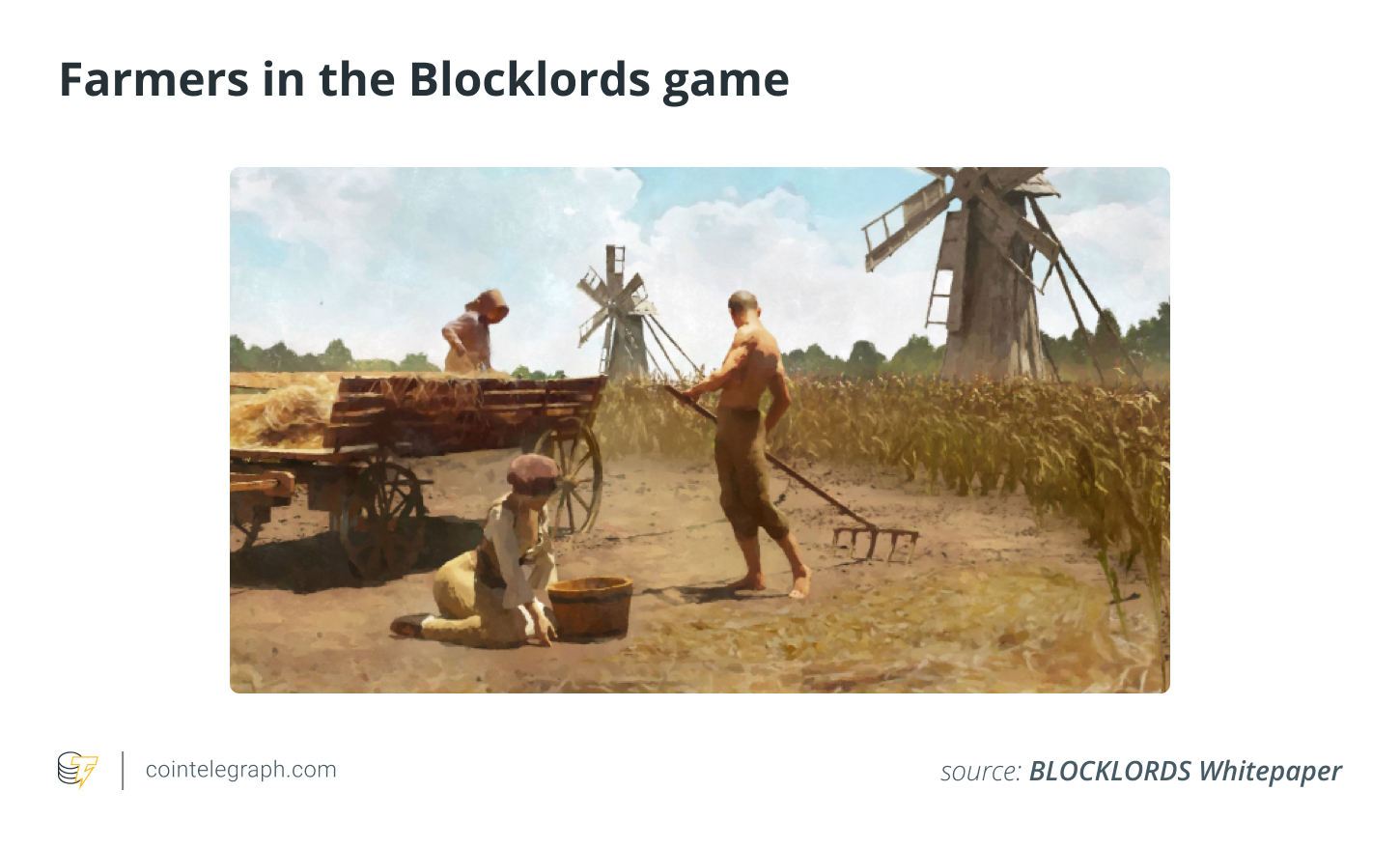 Farmers can choose a region, controlled by a Lord or Lady, in which to settle. Lords/Ladies form groups, compete in battles, the ultimate winner of which becomes King/Queen. Participating as a Farmer, players work, harvest and build houses on farms. One can rent additional Farmers from other players to get helping hands, but be mindful that they consume food too. To award bonuses to a village, one can house the hired hands in buildings.

In farms, players have multiple ways to get rewards. These include managing animals and livestock, trading at markets and crafting better items than others. Cooperating with other gamers helps players to garner more rewards.

Players who cultivate enough resources leave their farms and choose between becoming a Raider or a Knight. Raiders are mercenaries who attack Farmers at will, plunder the villages and steal resources from Lords. They have limited timeframes for these activities, but if the players play right, they can get great rewards.

Knights are salaried associates of a Lord. Their duty is to defend Farmers and villages, and kill the Raiders they come across. Their valor against the Raiders brings them a handsome profit and enables them to rise through the ranks. A Knight with enough resources might then opt for a new role.

Successful players can assume the role of Lords and Ladies, with a unique set of functions and responsibilities. Lords and Ladies exercise control on large tracts of land. Their actions directly impact the region they rule. They collect taxes and resources from Farmers, pay salaries and rewards to Knights and develop infrastructure.

Lords and Ladies use their resources such as Knights, Farmers, and land efficiently and build cities into dynamic centers of trade and commerce. They also have to secure their settlements from Raiders and rival Lords. Having capable Knights and Farmers is key to their success. They can also form alliances with other Lords and Ladies.

Lords and Ladies who conquer the path like no other can rise to the rank of King or Queen, the ultimate rank in Blocklords. The way they rule, fairly or with an iron fist, is upon the rulers. The crown is responsible for managing currency, trade agreements, armies and regions. A King or Queen might also start or participate in realm-altering wars. 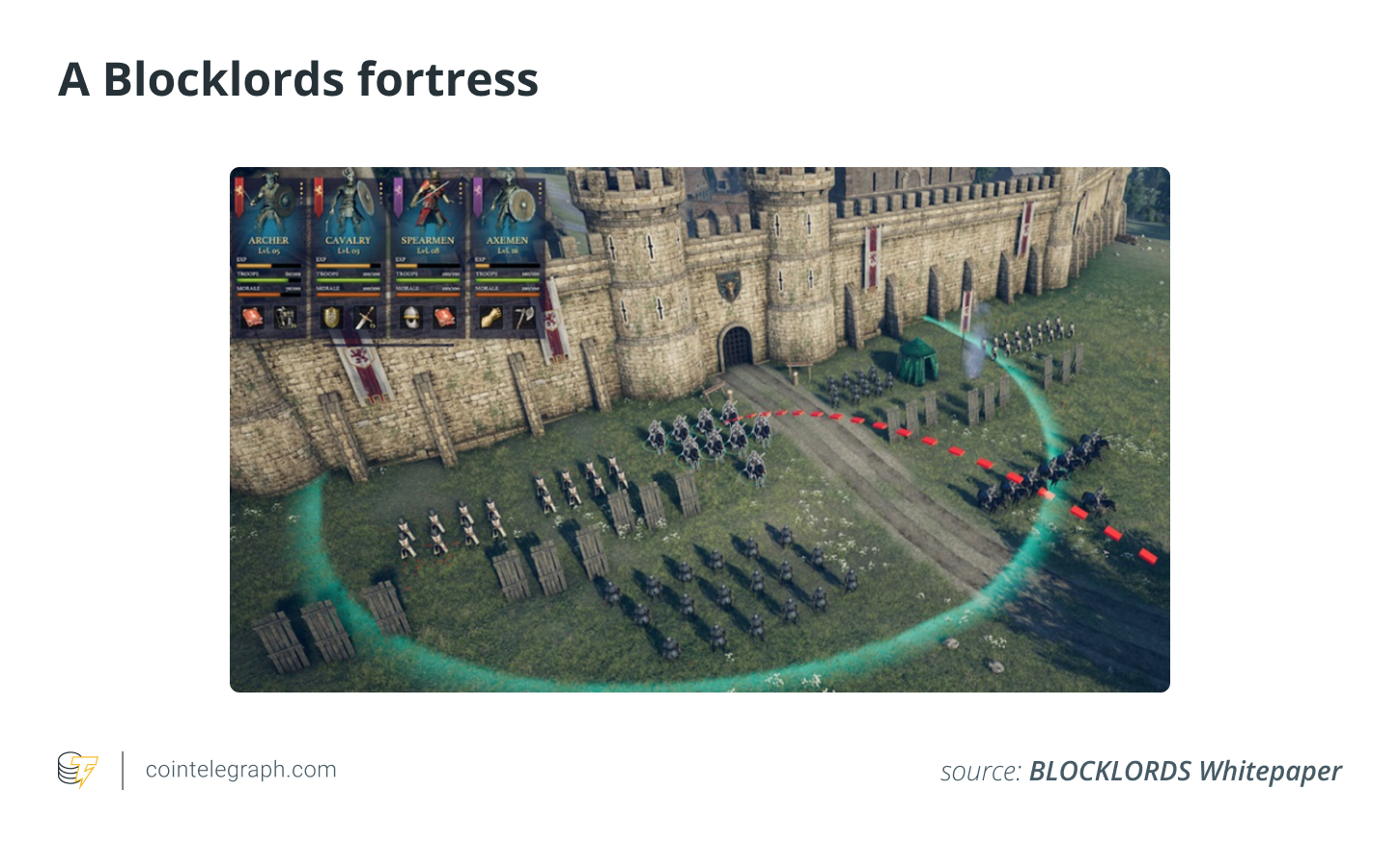 Maps in Blocklords are dynamic and change with the tides of war. The choices of a King or a Queen profoundly affect all their subjects. Because their decisions impact the universe in Blocklords at the highest level, so they must use their power wisely. Smart rulers use diplomacy when faced with challenges and engage in warfare only when they have no choice.

How to earn on Blocklords

Blocklords is tailormade for hardcore game aficionados wanting to have a hair-splitting experience in a shared universe. Players can make money playing Blocklords and feeling the adrenaline rush. In-game heroes are economic assets in Blocklords, with the earnings coming from activities like fighting bandits, winning battles, supporting allies, farming and trading.

Related: How blockchain games create entire economies on top of their gameplay?

The game is a player-owned economy rewarding players regardless of their role. For instance, a player could collect unique items and trade them for a decent profit. Heroes who demonstrate impressive leadership skills and win battles get their hands on unique items that the players can immediately turn into earning opportunities.

Tradable nonfungible tokens (NFT) heroes on Blocklords can be potentially sold in any marketplace. Blocklords gameplay enables players to import NFTs in the game and launch battles to conquer territory. Leveraging their playing skills, they level up their heroes, send the NFTs outside the game and then sell them on any decentralized marketplace.

Crowns (CWS) is an ERC-20 token used to purchase items within Blocklords. CWS token was introduced by Seascape Network, an incentivized ecosystem of gamers, developers and influencers. Every recharge within the game is distributed among all tokenholders as dividends, a feature that is termed Paywave. Ten percent of the total supply of 10,000,000 CWS has been earmarked for the community.

Strategy games have dedicated pools of gamers. From the ancient game of chess to Blocklords, strategy games have infused the domain with thrill and competition. The emergence of blockchain has led to a scenario where games exist with a user-driven economy and players can generate a passive income from their in-game activities.

Blocklords gamifies strategy-making and playing at a grand scale. What makes the game astounding is that both the novice and experienced can enjoy the game to the hilt. They begin as Farmers, and as they gain skills and experience, they go through the levels like Knights/Raiders, Lords/Ladies, and ultimately Kings/Queens.

Throughout the journey, the gamers learn social skills like team building and engagement, so Blocklords not just brings in a scintillating thrill of battles but also helps one learn some life-enhancing stuff. Due to its multiple features, Blocklords can be considered the standard and torchbearer for the upcoming strategy games.

Purchase a licence for this article. Powered by SharpShark.

Crypto prices keep crashing, and it seems like there’s no bottom in sight Here are three reasons why cryptocurrency