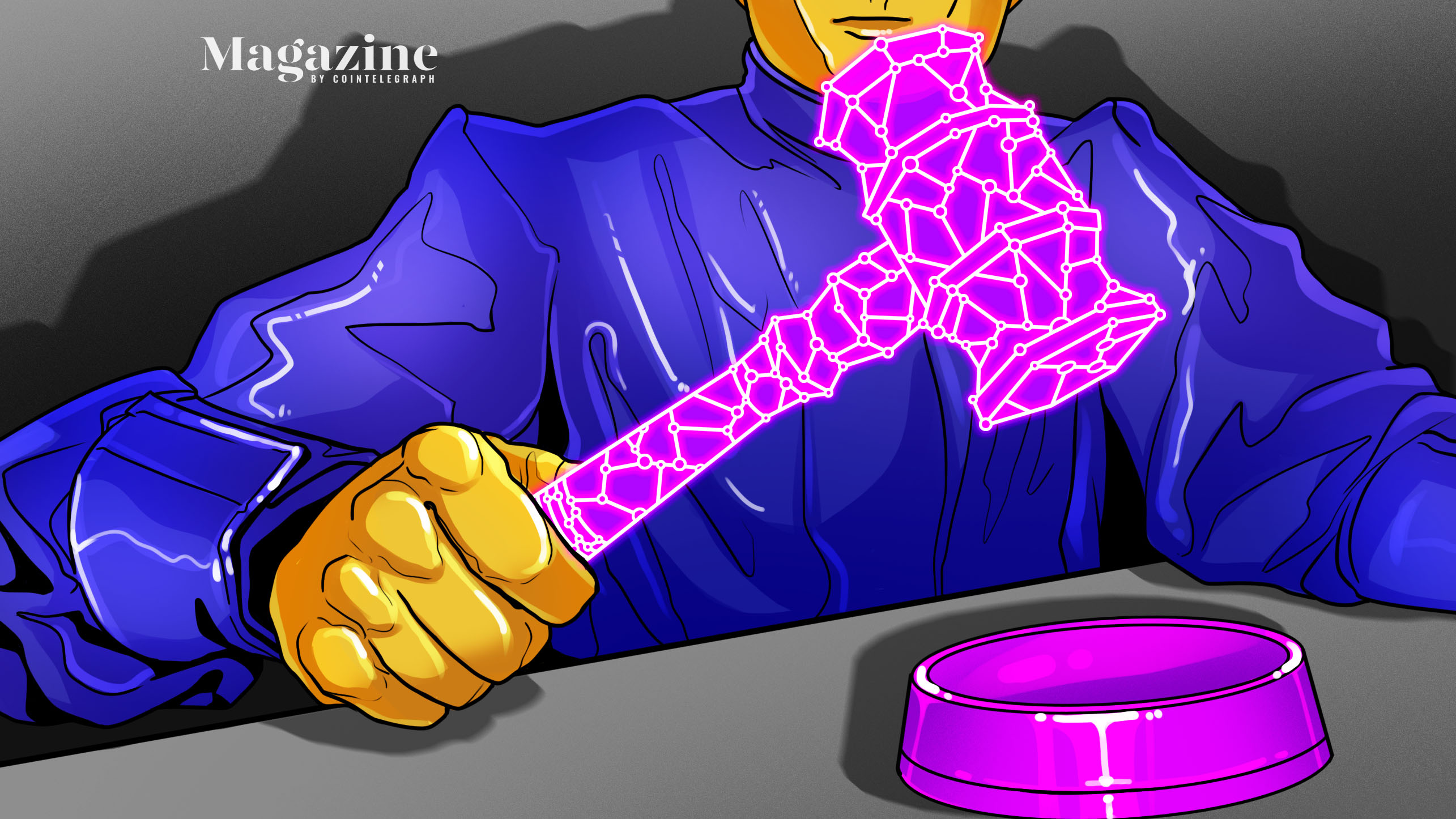 Want to sue a crypto project that ripped you off? That will be $1 million, thank you. Luckily, there are options for those who face the daunting prospect of spending a small yachts worth of money in lawyer fees for their chance at crypto justice.

In practice, the majority of victims of international blockchain scams find themselves with little hope of recovering their money. According to crypto law expert Jason Corbett, a normal court case to recover $10 million$20 million dollars in the blockchain sector can easily cost between $600,000 and $1 million, with an average timeline of 2.5 years.

But there are a range of cheaper and better options to get a successful outcome if you learn how to work with the system. Legal investment funds can finance your case for a share of the judgement sort of like a VC firm for lawsuits.

The vast majority of lawsuits up to 95% are privately settled before they go to court, Corbett says.

Corbett has six years of experience in crypto law as a managing partner of international blockchain-specialized boutique law firm Silk Legal. Speaking with Magazine about his new crypto litigation financing project Nemesis, Corbett notes a clear increase in disputes stemming from deals gone wrong, contractual breaches and bad actors over the past months due to the bear market, which has seen many projects go sideways.

There are a variety of common disputes involving blockchain, from misuse of funds to smart contract failures, which are listed below.

Misuse of investment proceeds happens when fundraising proceeds go to founders Lambos and villas instead of legitimate business needs, he explains. While the occasional boat party networking or team-building event might be justifiable, salary packages are the main permissible routes by which invested capital can flow to the founders even dividends can only be paid from profit, not incoming investments.

The sale of fraudulent crypto happens when a token is sold to investors based on false claims. A possible (though not tested in court) example is found with the automated market maker protocol SudoRare, which suddenly shut down and disappeared with investors money. Such cases can easily cross the threshold into criminal territory, according to Corbett. However, he admits that pursuing the culprits can be very difficult unless the scammers have been reliably identified.

Illegal securities offering. One way that investors in flopped tokens can attempt to claw back money is by claiming securities fraud, demonstrating that the offering was illegal in the first place, such as an unregistered securities offering masquerading as a utility token sale. There are currently several U.S.-based class action lawsuits running against U.S. projects, such as those against Bitconnect and Solana. Corbett explains that such claims fall under securities law, being civil claims as opposed to those brought by the likes of the SEC classifying projects like Ripple as securities.

Difficult organizations to sue. Another area that can present a legal minefield is DAOs, which are often not registered anywhere and dont have any kind of legal personality, and individuals are just working on their behalf. Corbett warns that such arrangements can easily expose unsuspecting DAO workers to vicarious liability since the entity they believe they are acting on behalf of may not actually exist.

Even smart contract disputes can lead to the courtroom. If two parties agree to act according to a certain trigger on a smart contract, but it somehow malfunctions, that can put a lot of liability on the coder or smart contract audit firm, Corbett says. In such cases, the insurance policies of audit firms become critical.

When it comes to IP infringement, it is easy to imagine NFTs where copyrighted images are being minted and sold without permission. Even code, however, can be protected by copyright or patents, in which case implementing the code of other projects or even forking certain tokens may result in a serious claim. (This is obviously not the case with open-source software, which is why Uniswaps code has been forked so often.)

Irena Heaver, a Dubai-based lawyer specializing in blockchain, explains that while the aggrieved party is responsible for funding civil lawsuits, criminal cases are pursued by the state. As criminal cases deal with criminal matters rather than mere torts or mistakes, like a breach of contract and can result in prison instead of monetary judgements, the bar is set much higher in regard to evidence.

As an ideal, a criminal conviction can happen only when all reasonable doubt is removed, whereas a civil judgement can be made on a balance of probabilities, meaning that one party is at fault more likely than not. It is also the state, instead of the victim, that decides whether to pursue a criminal case something that happens infrequently when the alleged thieves are far overseas.

If the state isnt going to fund it and you cant afford to drop seven figures on the uncertain outcome of a court case, what can you do?

Alternative dispute resolution, involving either arbitration or mediation, is a cheaper option than formal courtroom proceedings. While arbitration is usually a binding process that can be viewed as court lite, mediation is a lower-cost private process in which a third party actively helps the parties come to a mutual understanding and agreement, Heaver explains. I always recommend mediation, she says, explaining that she has mediated dozens of crypto disputes where both parties have reached a satisfactory conclusion.

When a case does go to court, Heaver emphasizes that the judge needs to understand what is going on, which is far from self-explanatory when it comes to complex questions involving newfangled monkey-DeFi derivative crypto meta-chain utility tokens.

That means judges rely on expert testimony, and we all know about the fake experts in this space. These experts are selected and paid for by the parties themselves, and Heaver laments that for the right amount of money, you can find an expert whatever you want, naturally requiring the other party to pay for their own expert to refute the other.

When there are a large number of potential claimants, class-action lawsuits can pool them together into a single case. These are often undertaken by law firms as entrepreneurial undertakings, where the law firm does not charge claimants, who instead agree to give the firm a share of any settlement or winnings.

An example can be found in a class action against billionaire Mark Cuban, who Moskowitz Law Firm argues used his fame to dupe millions of Americans into investing in many cases, their life savings into the deceptive Voyager platform and purchasing Voyager Earn Program Accounts, which are unregistered securities.

Subscribe
The most engaging reads in blockchain. Delivered once a week.

Another way to raise an army of lawyers without selling both kidneys is legal financing, also known as settlement funding or third-party litigation financing, which happens when a private investor gives a plaintiff money in return for a percentage of a legal settlement or judgement. This is effectively an outside investment toward a successful lawsuit, and the invested funds are generally directed toward funding the lawsuit in question.

Its about pairing someone with a risk appetite with a plaintiff who has a lawsuit but no funds, explains Bill Tilley, managing partner of legal venture fund LegalTech Investor, who has been working in the legal financing industry for 15 years. Funds like his look into an average of 20 cases for each one they take on, with the full due-diligence process costing up to $100,000 before a decision can be made to fund. This involves not only determining that a case is likely to succeed but that the defendant can actually be made to pay.

The big challenge in a crypto case is whether you can find and collect the money, even if you win the case resources need to be spent to trace the money.

Determining the jurisdiction in which a case can be tried can also be a huge challenge in itself. In his own litigation funding research, Tilley has come across a perplexing trend of crypto-mystery. Weve looked at some crypto cases where just nailing down the jurisdiction is a nightmare theyll have multiple entities domiciled in multiple countries, he recalls. Crypto law is not an easy industry to crack.

For the past several years, Corbett has been planning to create a blockchain-specialized litigation fund. There was no point launching this when everything was going up, he says, but now with the bear market bringing increasingly disappointed investors to law offices around the world, things are looking up for crypto law. His litigation fund, Nemesis, has now gone live.

The litigation funding industry is growing fast and becoming a financial solution for a handful of use cases. Part of its maturity is increasing competition on investments, which requires the funder to, in addition to providing capital, add value to the case. Therefore, there is a rise in domain focus funds, he says.

Like any investor, it is important to build a trustable relationship with the plaintiffs and make sure their expectations from the case are reasonable and their motivations are in the right place. It is also important to have legal teams, consultants and experts with a proven track record in the subject matter.

Jurisdiction plays a decisive role. We cant enforce judgements against people in certain countries, so we have to pass on matters like that, he says, adding that the United States and the United Kingdom, where enforcement of court orders is relatively straightforward, are the biggest markets for blockchain law. The British Virgin Islands are also interesting because a lot of blockchain projects have used those structures, he notes. The EU, U.S., U.K. and Australia have mature legal funding industries, he says, adding that not all jurisdictions allow for cases to be financed by third parties.

Similarly to Tilleys firm, Corbett says that his Nemesis team vets cases to select those which are most attractive from an investment perspective. We look to earn either multiples or a percentage of the investment, he says, explaining that much of the potential outcomes are determined by the defendants directors insurance plans, which often become the payers of last resort. If the opponent has no money, the action often goes by the wayside, Corbett concludes.

In addition to making oodles of money, Tilley explains that legal funders get the added benefit of helping some people that have been wronged that wouldnt otherwise have had access to the justice system today.

We can be part of fixing the problem of the bad actors by holding them accountable so crypto will be bigger, stronger and better 5 or 10 years from now.

Have an idea for a kickass story? Find me at [email protected], or on Twitter