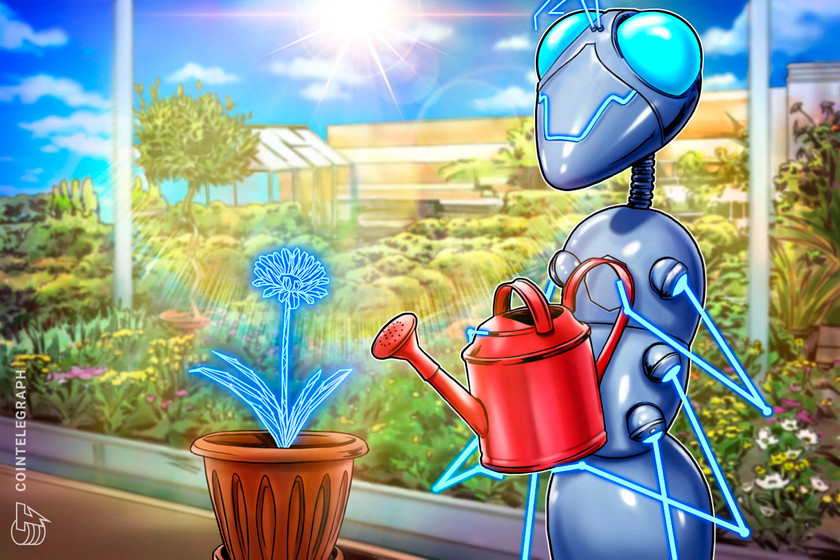 Web3, the third iteration of the internet, is rapidly approaching the consumer mainstream with the promise of disrupting the status quo of digital interactions and creating a new paradigm for democratic engagement.

Lens Protocol is a decentralized social graph built by Aave with the vision of cultivating a Web3 environment in which creators are the primary point of focus.

A Lens Protocol mission statement was cryptographically signed and endorsed by a number of high-profile figures from within the crypto and DeFi space, including Ryan Selkis, Ryan Sean Adams, Gmoney, Camila Russo, Andrew Wang and Josh Ong, among others.

Cointelegraph sat down with the head of growth and partnerships at Aave companies Christina Beltramini during the NFT.NYC in June to discuss the intentional growth trajectory of Lens, social graphs in the era of Web3 and the future of content creation.

After working for the likes of JPMorgan and Tidal, Beltramini assumed the role of global business development of music partnerships at prominent social media platform TikTok in mid-2019.

It was during this time she witnessed what she described as an innate lack of autonomy and bureaucratic constrictions that TikTok content creators experience when using the platform, most notably during the frequent requests to reinstate mistakenly deactivated accounts.

The evolution of Web3, coupled with her intrinsic desire to support the artistic expressions of content creators, was enough to convince Beltramini to pursue contributions toward a decentralized social future.

Excited to welcome Christina, coming from TikTok to Aave fam to lead the growth for the decentralized social graph, and all the innovation coming out of Aave. 2022 is going to push web3 closer to the mainstream https://t.co/SksQVdq2QQ

Over the last few years, the industry has witnessed the emergence and adoption of digital identity services such as Ethereum Name Service (ENS) domains, Solana Name Service domains and NFT.com, among others. Beltramini shared her thoughts on how the profile aspect of Lens Protocol compares and differs from those examples:

“Name services don’t connect wallets to wallets or social signals. With ENS, I will know what your wallet is and I’ll be able to transfer to you, but I won’t actually be able to see the connections within your wallet. So, with Lens, your profile’s an NFT, [and] when you follow someone, that’s an NFT as well. And that’s what ties the association together.”

Profile NFTs are one of the core components of the Lens model. Issued to an individual’s wallet address, they aim to serve as a Web3 headquarters of sorts, enabling self-custody of data, the ability to publish authentic pieces of content on-chain, and built-in governance capacities should users wish to construct their own DAO.

Recent: Hodlers and whales: Who owns the most Bitcoin in 2022?

Modules and logic functions open up an entire ecosystem of interoperable NFTs. Other users of the platform can attain a FollowNFT for following a profile and CollectNFT for collecting unique pieces of content. Additionally, mirroring enables users to share, or essentially reblog, content while acknowledging the original owner.

By democratizing user data and attaching NFTs to the individual action, Lens considerably advances upon the traditional experiences of social media, commerce and digital consumer interaction.

The name Lens was inspired by the Lens Culinaris, the green flowering plant whose seeds produce the lentil.

Beltramini expressed that this choice of branding was a conscious, deliberative decision to metaphorically symbolize “owning your digital roots” and nurturing a ground-up ecosystem that “we cultivate together as the community” before stating:

“We are the application layer, and having multiple protocols that speak together to build different experiences and applications on Lens is really with the community from the decision making and how the protocol will be governed.”

Societal concerns around the environmental expenditure of Bitcoin (BTC) mining and NFT minting have sparked decisive behaviors from crypto companies seeking to remain at the cultural forefront. Lens Protocol was built on the Polygon network to focus inherently on “scalability and environmental” factors, Beltramini said.

She also added that there was a pre-existing “deep relationship between Polygon and the Aave companies on the DeFi side” so that “when the protocol was being built a year and a half ago, it was really the only scaling solution.”

Beltramini noted the concept of social graphs, an interconnected map of connections formed by people and mutual friends in a dispersed network. An application built within the Lens ecosystem called Cultivator depicts this network as an observatory of night-sky constellations.

Decentralized social media has arguably become a buzzphrase within Web3 over the past few years, but according to Beltramini, the vision for Lens incorporates the truest values and principles of Web3.

“We believe at the Aave companies that your social content and network should be a public good, and there shouldn’t be large moats that gatekeep you to different platforms,” she said.

Beltramini also raised the significance of users being able to control parameters of privacy, maintaining numerous personas across different platforms on a single social graph. In traditional social media, this would be understood as one type of personality for work contacts on Linkedin, while others for family and friends on Instagram.

Asserting the point of self-custody, she continued, “We won’t be only using three platforms. We can use whatever platforms we decide and have the ability to truly digitally exit a platform.”

Lens has registered over 100 applications on its server to date. Often, such protocols can have strict application processes or eligibility criteria for developers to pass. The Lens model does have some basic entry points but is largely open. Beltramini said:

“Right now in Web2, it’s very hard to start a new social application because you essentially have the cold start issue bringing people into the funnel. So, the idea [with Lens] is that developers will be able to more easily build for the experience versus growth hacking for the social graph and spending millions of dollars in CPA [cost per action] spend.”

The most popular application on Lens at the time of writing is Lenster, a permissionless, decentralized social media most closely comparable to Twitter in terms of its user interface and everyday experience but gaining traction as an alternative model in the space.

In principle, Web3 social platforms will grant creators the liberal autonomy to own and govern their work like never before. Artists and even journalists will not be stringently tied to the platforms or publications they publish on but will have the opportunity to foster and sustain their own communities.

Integrating NFTs enables the creator to fully capitalize on the data metrics extracted from their profile, offering a more tailored, personable and unique experience to their audience, while retaining monetization rewards in instances of virality.

Beltramini concluded by stating that “Web3 social is going to accelerate different experiences because of the growth hacking, community building, and open-source nature.”