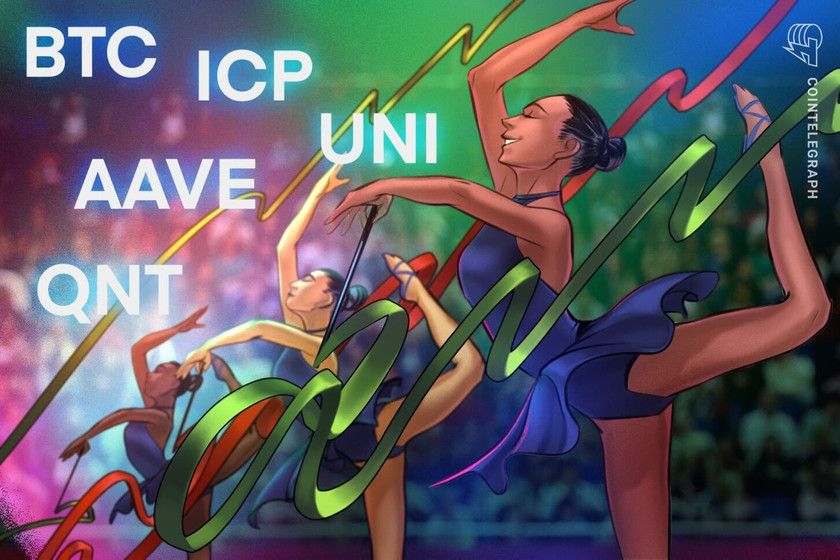 Bitcoin is trending toward a retest of its lower support and if this happens, UNI, ICP, AAVE and QNT could breakout to the upside.

Bitcoin (BTC) has given up ground over the weekend as investors remain cautious about the United States consumer inflation data to be released on July 13. Analysts anticipate June’s consumer price index to be higher than May’s 8.6% level.

Due to the macro uncertainty, investors are not confident that Bitcoin’s correction is over. However, Fidelity Investments’ director of global macro Jurrien Timmer said that Bitcoin is back at the 2013 bull market levels “if the price per millions of non-zero addresses“ is considered for valuing it. That implies that “Bitcoin is cheap.”

The readings on the Reserve Risk indicator, which shows long-term holder sentiment, plunged to a new all-time low in July. Commentator Murad said this meant that “we are in the high timeframe bottoming zone” or the indicator may be broken.

Could Bitcoin turn around and start a new rally or will it continue lower? Are altcoins showing signs of bottoming out? Let’s study the charts of the top-5 cryptocurrencies to find out?

Bitcoin broke above the symmetrical triangle pattern on July 7 but the bulls could not sustain the momentum at higher levels. This suggests that the bears have not surrendered and are attempting to defend the overhead resistance at $23,363.

The bears are attempting to sustain the price below the 20-day exponential moving average ($21,230). If they succeed, the BTC/USDT pair could decline to the support line of the triangle.

If the price rebounds off this level, it will suggest that bulls continue to buy at lower levels. The bulls will then again strive to push the price above the overhead resistance at $23,363 and the 50-day simple moving average ($24,692). If they succeed, it could signal the start of a new up-move.

On the contrary, if the price breaks below the support line, the bears will endeavor to pull the pair below $17,622.

The bears pulled the price below the 20-EMA but a minor positive is that the bulls are trying to defend the 50-SMA. This indicates accumulation at lower levels. If bulls thrust the price back above the 20-EMA, the pair could rise toward $22,500.

Alternatively, if the price turns down from the 20-EMA, the likelihood of a break below the 50-SMA increases. If that happens, the pair could extend its decline to $19,300. The flattening 20-EMA and the relative strength index (RSI) just below the midpoint do not give a clear advantage to the bulls or bears.

Uniswap (UNI) broke above the overhead resistance at $6.08 which completed a bullish inverse head and shoulders pattern. The bears are attempting to pull the price back below the breakout level.

If they manage to do that, it will suggest that the rise above $6.08 may have been a bull trap. That could pull the price toward the 20-day EMA ($5.39). If the price rebounds off this level with strength, it could increase the possibility of a break above $6.62. The pair could then pick up momentum and rally toward the pattern target of $8.78.

Conversely, if the price breaks below the moving averages, it will suggest that the bullish momentum has weakened. The UNI/USDT pair could then remain range-bound for a few days.

The bears pulled the price below the breakout level of $6.08 but the strong rebound off the 20-EMA shows aggressive buying at lower levels. The buyers will make another attempt to push the price above $6.62 and resume the uptrend.

Contrary to this assumption, if the price turns down and breaks below the 20-EMA, it will suggest that the bears are trying to trap the aggressive bulls. The pair could then drop to the 50-SMA. If this level also cracks, the decline could extend to $4.60.

Internet Computer (ICP) rose above the 50-day SMA ($6.48) on July 8, indicating that the bulls are attempting to form a bottom. The moving averages are close to completing a bullish crossover and the RSI is in the positive zone, suggesting that the bears may be losing their grip.

If the price rebounds off the moving averages, it will suggest that the bulls have flipped the level into support. That could open the doors for a possible rally to the psychological level of $10 where the bears may again pose a strong challenge.

Alternativel, if the price turns down and breaks below the moving averages, it will indicate that the bears continue to sell aggressively at higher levels. The ICP/USDT pair could then drop to $5 which is likely to act as a strong support.

The long wicks on several candlesticks above $7 indicate that bears have not yet given up and they continue to sell on rallies. The bears pulled the price back below the 20-EMA but a minor positive is that the bulls aggressively purchased the dip. This suggests demand at lower levels.

The buyers are trying to push the price back above the 20-EMA. If they succeed, the pair could rise to $6.70 and later to $7.

Contrary to this assumption, if the price turns down from the overhead resistance and slips below $6.30, the pair could slide to the 50-SMA.

AAVE’s recovery rose above the 50-day SMA ($79) on July 9, indicating a likely change in trend. The 20-day EMA ($68) has started to turn up and the RSI is in the positive zone, indicating that bulls are attempting to gain the upper hand.

Contrary to this assumption, if the price sustains below the 50-day SMA, it will suggest that bears continue to sell on rallies. The bears will then strive to sink the pair below the 20-day EMA and trap the aggressive bulls.

The 4-hour chart shows that the pair broke above $78 and completed a bullish ascending triangle pattern. The bears pulled the price back below the breakout level but a positive sign is that the buyers are defending the 20-EMA.

If the price rises and breaks above $83, the pair could pick up momentum and rally to $93. The pattern target of this bullish setup is $110.

The bears will have to sink the price back below the 20-EMA to invalidate this positive view. That could open the doors for a possible drop to the 50-SMA.

Quant (QNT) has risen sharply in the past few days, indicating that a bottom may be in place. The momentum picked up after buyers pushed the price above $67.

The moving averages have completed a bullish crossover and the RSI is in the positive zone, signaling a possible trend change. The up-move is facing a strong hurdle near $90.

If the price turns down from this resistance but rebounds off the 20-day EMA ($64), it will suggest that the sentiment has turned positive and traders are buying on dips. That could enhance the prospects of a rally to the psychological level of $100.

This positive view could invalidate in the short term if the price continues lower and breaks back below $67.

The sellers are attempting to stall the up-move at $90 but the upsloping moving averages and the RSI in the positive territory indicate that bulls have the upper hand. If the price rebounds off the 20-EMA, the buyers could again push the price toward $90. A break and close above this resistance could signal the resumption of the short-term uptrend.

This positive view could be invalidated in the near term if the price turns down and breaks below the 20-EMA. The pair could then decline to the 50-SMA.

The views and opinions expressed here are solely those of the author and do not necessarily reflect the views of Cointelegraph. Every investment and trading move involves risk, you should conduct your own research when making a decision.