The search term ‘Bitcoin Crash’ is trending — Here’s why 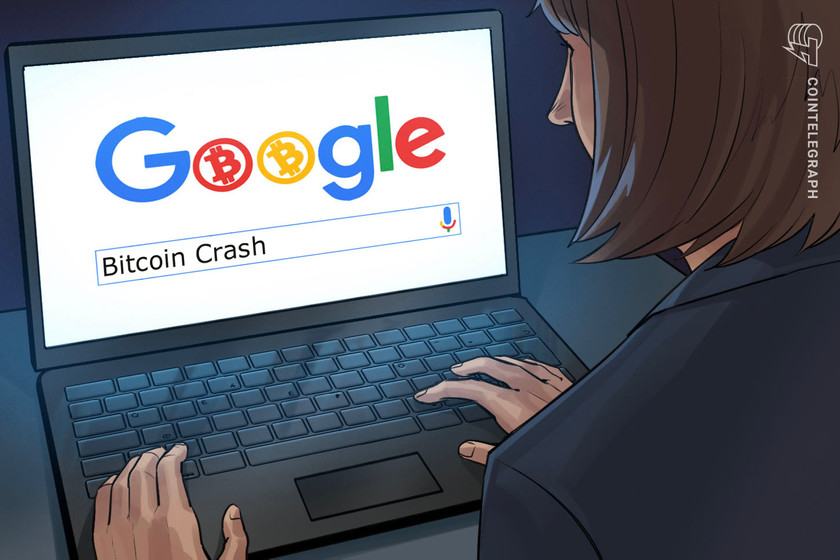 The digital gold, aka Bitcoin, has been marked “dead” at least 458 times since 2009. However, BTC proved to be more than alive each and every time.

Last year, the word “crypto” was trending all over the internet as the crypto market was generally flourishing.

However, now it appears that the good fortunes of digital coins havee waned as cryptos have slipped into a serious bear market. Bloomberg recently reported that while the short-term investors wasted no time in dumping their holdings, even the old-timers are now exiting the scene.

The most recent Bitcoin (BTC) crash saw the asset’s price go as low as $17,000, its lowest price since late 2020. Reflecting the general air of uncertainty among investors in the cryptocurrency market, “Bitcoin is Dead” is beginning to trend once again, at least, according to the data from Google Trends.

But, while downturns may generally be a part of crypto markets, things continue to look bleak for crypto.

What triggered the latest Bitcoin crash?

Bitcoin has slipped nearly 70% from its November record high, but it all started in March when CNBC reported that the Federal Reserve approved its first rate hike in three years. That singular act went on to be a major turning point, putting downward pressure on risk assets like Bitcoin. Meanwhile, a series of other events soon followed that also impacted the crash of Bitcoin, including Russia’s invasion of Ukraine and the Terra crash.

“A combination of macro headwinds, such as increased interest rates and geopolitical uncertainty, has triggered a broader market downturn that has caused a major delegating event in crypto markets. Specifically, the implosion of Terra and the following insolvency/deleveraging of Celsius and Three Arrows Capital, has forced the liquidation of large amounts of BTC, which caused a price crash.”

First Digital global digital payments firm CEO Vincent Chok insisted on the Luna Classic (LUNC) collapse being the major cause of the crash. He told Cointelegraph:

“This is a part of the normal market cycle. The primary trigger was not geopolitical conflict, but the LUNC collapse and the systemic risks associated with the large exposure to this token.”

The collapse triggered margin calls for hedge funds and defined liquidity positions. Chok added that it’s part of the super cycle of the industry, an evitability of the bull run. Something had to be corrected sooner or later, he added.

Bitcoin has been written off as dead at least 458 times in the past. But each of those times, it has managed to come back to life.

“Bitcoin has been declared dead hundreds of times in the past and, so far, these commentaries have always been wrong. If the past is any guide, Bitcoin is not dead. I don’t want to get into price forecasts, but my focus has always been on the future of what Web3 can build and how those tools can provide solutions to global problems that humanity faces.”

“We have been through ‘winters’ before where the value of digital assets dropped to uncomfortable levels, but we have seen that the greater crypto community emerges from these periods stronger and more resilient than before. I believe that we will get through this and on the other side the products and assets that have survived will be value generators not just for Web3, but beyond,” Owocki added.

Furthermore, Schmitt also claimed that “a temporary drop in its price does not significantly impact Bitcoin.” He explained how Bitcoin has had to go through multiple larger drops in the past.

Several other on-chain metrics suggest that Bitcoin will most likely come out of its current situation. One such important metric is the 200-weekly moving average (WMA).

For a long time, the moving average has been a credible indicator of BTC price. Previously, at every point that Bitcoin has hit the 200 WMA, it completely bounced back. A careful look at what happened between 2015 and 2020 in the chart below gives insight into this claim.

There are times that Bitcoin dipped slightly below the 200-WMA, but it never stayed there for too long.

So, seeing as Bitcoin is currently trading at a very close range to its 200-WMA, there may be a reason to believe that Bitcoin is not dead. In fact, an upward swing is justifiably expected soon.

The impact of crypto on the economy

Institutional involvement in the crypto market’s last bull cycle has sparked fears that the broader economy may potentially be affected.

Many companies have had to lay off a sizeable number of their employees, and others are looking at potential insolvency. Additionally, a recent Pew Research Center survey found that around 16% of U.S. adults have in one way or another been involved with cryptocurrency. So to an extent, there is a certain amount of national exposure to the current situation of the crypto market.

However, not everyone believes that the crypto market situation will impact the broader economy. In an interview with CNBC, Joshua Gans, an economist at the University of Toronto, said:

“People don’t really use crypto as collateral for real-world debts. Without that, this is just a lot of paper losses. So this is low on the list of issues for the economy.”

Despite the bleak outlook for the crypto market at the moment, crypto continues to see massive adoption across the board. With increased involvement from sports organizations, private individuals, corporate institutions and even states and federal governments, there is a clear trend of crypto adoption.

According to United States-based news outlet Axios, crypto app downloads are improving on a yearly basis, and that should be attributed to higher media coverage. While there was a 64% growth in 2020, last year saw an even more impressive 400% spike in the number of crypto apps downloaded.

Crypto deals with sports brands, teams and leagues increased by more than 100% in 2021 and are expected to reach $5 billion in the next four years.

How long until BTC bounces back?

Going by past trends in the crypto market, the present situation may take weeks, months, or possibly years to reverse, and while the Bitcoin price is suffering at the moment, that should not take away the fact that it is still up 31,437% over the last nine years. In fact, it was currently more than double its price two years ago. Owocki said:

“At Gitcoin Holdings, we know that it may take some time for the general market to recover — but we do not know exactly how long or which assets will recover. It could be five weeks, it could be five years. We are focused on creating value for the long term.”

While there is no exact timeframe as to when Bitcoin will resume an uptrend, it certainly seems that a temporary price drop will ultimately not impact the rapid growth of usage, adoption and prices of crypto assets in the long run.

Owocki believes that the evolution of the internet can be viewed through the lens of the evolution of nature. Instead of natural selection, “we have a market selection.” He said that there was a “Cambrian explosion” of opportunity created by the launch of Bitcoin and multiple forks of BTC.

Recent: A brief history of Bitcoin crashes and bear markets: 2009–2022

“As this Cambrian explosion works its way through cycles of greed and fear, projects grow and die, and through it, all the heartbeat of innovation continues to pulse. I can’t wait to speed run this evolution until we get to the Web3-equivalent of keystone species like dolphins, humans, forests, or mycelial networks,” Owocki added.

The Gitcoin DAO founder doesn’t think that the BTC or crypto crash is big enough to kill an economy. Throughout history, Owocki added, there have always been bear markets and bull markets. He says that Web3 will emerge on the other side of this stronger, and will contribute even greater value to the world economy than ever before.