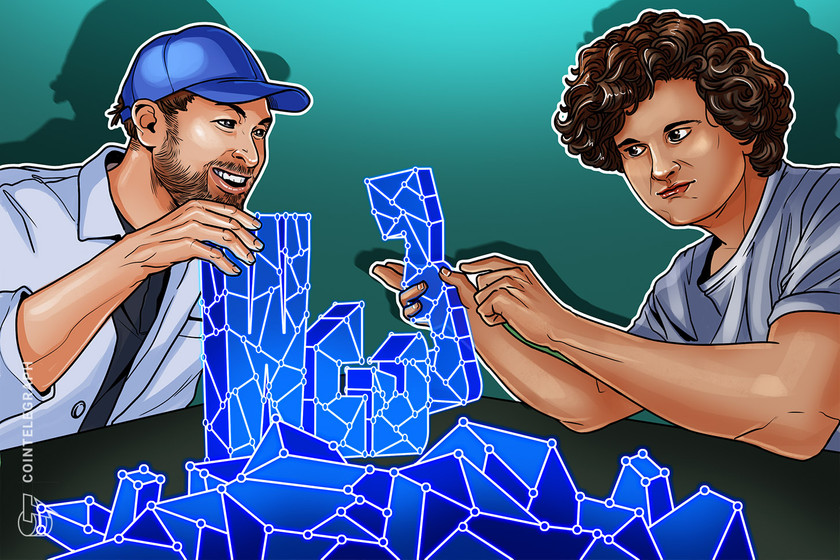 The blockchain ecosystem is constantly evolving, yet there always seems to be one overarching sector dominating at a given time. For example, decentralized finance (DeFi) projects received an impressive amount of venture capital funding in 2021, making it the most invested sector last year. Findings further show that nonfungible tokens (NFTs) were the second most invested sector, while Web3 and infrastructure ranked third.

Now, Web3 is proving to be the most sought-after investment sector in the blockchain industry. New findings from Cointelegraph Research confirm this, showing that Web3 captured around 42% of all individual deals during Q2 this year, while DeFi came in a distant second at 16%. Increasing interest in Web3 has also become apparent as venture capital giants like Andreessen Horowitz (a16z) close billion-dollar funds dedicated to investing in Web3 projects.

Zach DeWitt, partner at Wing and host of the summit, told Cointelegraph that the firm has been investing in Web3 since 2017 but that structurally there is more capital than ever before dedicated to the sector. “The best time to invest is in bear markets historically. Prices are down and tourists are scared off,” he said.

Come join me tomorrow at 10am PST for discussions with @SBF_FTX and @aeyakovenko about building in Web3!https://t.co/aARnfa9GRM

Yet, confusion around Web3 still remains, as DeWitt noted that although Wing conducts many interviews with founders, there are still a handful of early-stage companies that may not be aware of how to build and scale. Given this, DeWitt commented that the recent Web3 Builders Summit aimed to address these issues. “We wanted this virtual summit to focus on building, scaling and founder lessons — things that the early Web3 community can absorb and which will hopefully make the whole ecosystem stronger,” he remarked.

Wing’s Web3 Builder’s Summit began with Bankman-Fried discussing some of the mistakes he made early in his career. “There were plenty of things we screwed up,” the executive admitted. For example, Bankman-Fried shared that an embarrassing moment for him occurred when FTX was initially launched, noting that, at the time, he thought that 99% of uptime would be a great achievement:

“I thought this would be damn good, even though 100% would have been better. But this didn’t turn out to be correct, as it turns out that it’s incredibly important for customers to trade whenever they want to trade. It would be horrific if we are down for even 10 minutes every month, so we had to go back and rework some of our systems.”

Bankman-Fried also mentioned that early on, FTX was focused heavily on product prioritization, yet he noted that many products the crypto exchange initially launched did not receive traction.

“When you look at institutional traders, order throughput means a lot. We should have prioritized that earlier,” he said. Bankman-Fried further pointed out that FTX customers were phished during the exchange’s early days. He said that FTX had security features that could have prevented this, yet these were optional. “Many of these features are now mandatory because we realized this was really important for our users. Security can’t be optional,” he remarked.

Yakovenko, who formerly worked at Qualcomm leading the development of operating systems, told Cointelegraph that he has helped develop products such as the Amazon Fire phone and other devices that have previously failed. With this in mind, Yakovenko explained that he intends to build Solana’s Android mobile device Saga for a small audience consisting of the Solana developer ecosystem and the crypto community. “The initial user target are developers, hard core Solana folks that use Magic Eden NFTs and DeFi. There are already about 2 million monthly active users, but our goal is to reach 50,000 active Web3 mobile users moving forward,” he said.

During his fireside chat, Yakovenko added that founders launching Web3 products should pick their partners intelligently. To put this in perspective, Yakovenko explained that he connected with Bankman-Fried early in his career, noting that the FTX CEO told him there was a need to make blockchains faster. Yakovenko explained that FTX’s engineers then slammed the Solana network, which led the company to develop Project Serum, a decentralized derivatives exchange for Solana. “Early-stage founders need partners who are aligned on their visions and can help execute immediately,” said Yakovenko.

According to DeWitt, one of the biggest takeaways from the Web3 Builders Summit was hearing Bankman-Fried and Yakovenko discuss their mistakes. “It’s just awesome to watch those CEOs operate with such humility and transparency,” he said. DeWitt further pointed out that both Bankman-Fried and Yakovenko are quick to announce platform issues on Twitter to keep their communities informed. “Twitter is where the core of the crypto community is, which is why it’s important for FTX to use the platform regularly,” Bankman-Fried commented.

The Web3 hiring process was also a topic of conversation during the Builders Summit. These takeaways are key, considering that Web3 developer growth has skyrocketed since 2021. Bankman-Fried initially stressed the notion that many companies tend to overhire rather than under hire. However, he pointed out that this often leads to less productivity in the long run. He said:

“When running a business it’s easy to fall into a trap where you hire a lot of good people and then end up with a total diffusion of responsibility. You then have too many cooks in the kitchen and no one is sure what anyone should be doing.”

Bankman-Fried also said that companies shouldn’t hire new employees unless they will be entering a team that is already run well but has too many responsibilities allocated. “The current team needs to have been at the company long enough that they know how to do their jobs. They also need to have the management capacity to teach someone new,” he said.

In terms of hiring developers, Yakovenko shared that during the 2018–2019 bear market, this was difficult due to the lack of interest in layer-1 blockchains. “We hosted small events and sometimes I was the only one there,” the founder said. Yet, Yakovenko explained that Solana’s developer ecosystem took off following FTX’s incubation of Serum in July 2020.

Although Web3 is quickly gaining traction, it’s important to recognize the potential behind different use cases. For instance, Yakovenko explained that NFT marketplaces like Solana’s Magic Eden and OpenSea are both generating billions in revenue each year without using any elements of the Web2 economy. “There are no ad exchanges involved or stealing of user data,” he remarked. Yakovenko believes this demonstrates a fundamental shift in how businesses can operate moving forward in terms of digital ownership.

Yakovenko also mentioned that it’s becoming critical for Web3 applications to operate on mobile devices, noting that crypto has “been stuck on desktops” for years:

“If you look at most of the activity and sales happening on Magic Eden and OpenSea you will see that everything is mainly taking place on desktops. This is crazy, considering that every application now is mobile first.”

According to Yakovenko, this is due to poor user experiences of crypto-based applications on mobile devices. He said that app stores still don’t support crypto natively, noting that the newly released Solana Mobile Stack aims to solve these challenges by making “crypto first class citizens on mobile.” Yakovenko stated that Web3 applications built on the Solana Mobile Stack will not require usernames and passwords, as they will be privacy-first by default. “Everything will be designed through a ‘mobile wallet adapter,’ which is a protocol for connecting web apps and native Android apps to wallets on mobile devices. Once developers have the opportunity to build user experiences, we will see apps drive adoption for Saga.”

While Web3 mobile experiences are compelling, Bankman-Fried pointed out that FTX is interested in blockchain-based social media platforms. “I think blockchain can help bridge different social media platforms, creating unifying layers of data transfer,” he said during his fireside chat. Bankman-Fried also highlighted this use case in a detailed Twitter thread he posted on July 16.

31) Let’s say that, instead, we put messages on a blockchain.

So if you used Blockchain-Twitter (BT):

Recent data from Apptopia found that apps with “Web3” in the title or description available for download on iOS or/and Google Play are growing almost 5x faster in 2022 than in 2021. But mainstream adoption of Web3 platforms and applications is still very much underway.

According to Bankman-Fried, the biggest hurdle to mainstream adoption is scalable blockchains. “We need to get blockchains up to a million transactions per seconds to support a billion users,” he said.

In addition, he believes there should be native integrations with mobile devices and point-of-sale devices that can accept blockchain payments. While these elements will help boost adoption, however, Bankman-Fried is also aware that regulatory clarity is required in order for these features to be achieved. He said, “Having regulator clarity will allow institutional investors to get involved in this space and feel more comfortable.”

Yakovenko mentioned that product market fit is another challenge facing Web3 growth, noting that it’s been challenging for teams to develop “good products that people want.” Although Yakovenko is optimistic that Saga will revolutionize mobile devices, he commented that Solana’s recent network outages have been the biggest hurdle to overcome.

While Solana suffered full or partial outages at least seven separate times over the past 12 months, Yakovenko explained that Solana’s recent 1.10 release has helped the network run smoothly. “There are a lot of technologies in that release that we haven’t activated yet to make the network stable from the congestion attacks we have seen,” he added.

Fortunately, Web3 is still in its early stages and both Bankman-Fried and Yakovenko are optimistic about where the sector is headed. Bankman-Fried concluded his fireside chat by sharing that FTX is focused on becoming a leader in market structure, noting that the exchange is currently working on building this out to ensure improvements. He also mentioned that FTX is looking into creating a payments network.

As for Yakovenko, he explained that his victory lap will occur when a Web3 application becomes so compelling that consumers buy Web3-enabled mobile devices as a result. “Crypto revolutionized how people use the web, as we’ve seen chrome extensions utilized. If we can prove this in mobile devices, that will be a game changer.”