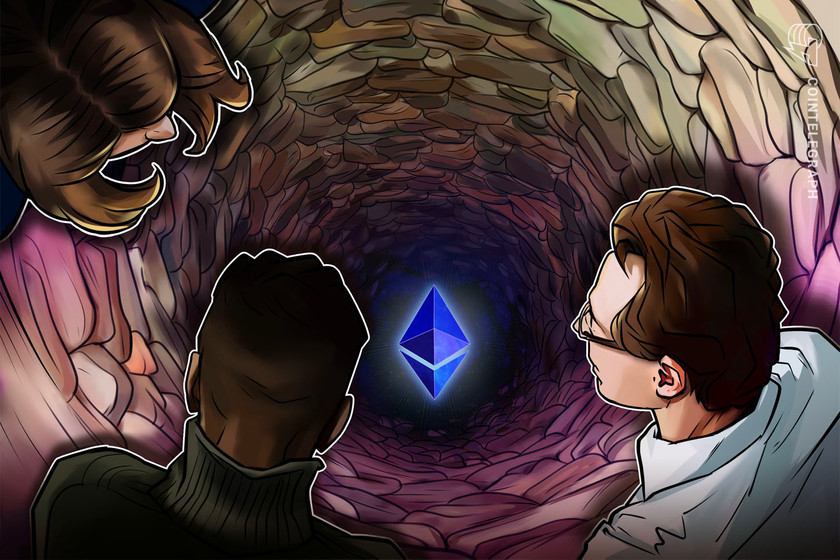 A recent report has narrowed ETHPOW’s downside target to $18 if the token ever comes to life post-Merge.

The listing of ETHPOW (ETHW) across multiple crypto exchanges has been followed by a huge drop in price despite some initial success.

For starters, ETHPOW only exists as a futures ticker, for now, conceived in anticipation that an upcoming network update on Ethereum could result in a chain split.

Ethereum will undergo a major protocol change called the Merge by mid-September, switching its existing consensus mechanism from proof-of-work (PoW) to proof-of-stake (PoS).

Therefore, Ethereum will obsolete its army of miners, replacing them with “validators,” which are nodes that would perform the same tasks by merely staking a certain amount of tokens with the network.

As a result, current Ethereum miners will be forced to migrate to other PoW chains or shut down. Ethereum Classic (ETC), which carries the original Ethereum PoW code, has benefited the most by becoming a haven for such miners.

For instance, the chart below shows Ethereum Classic’s hashrate rising and Ethereum’s hash rate dropping in the days leading up to the Merge.

But Ethereum Classic may not be the only option for ETH miners.

Chandler Guo, one of the most prominent crypto miners, has proposed that miners continue to validate and add blocks to the current PoW Ethereum chain post-Merge. This so-called contentious hard fork would keep the current Ethereum PoW chain alive, which Guo and supporters have termed ETHPOW.

And just as the Ethereum blockchain has its native coin in Ether (ETH), the new ETHPOW chain will have its asset called ETHW. Anybody holding ETH ahead of the Merge will receive an equal amount of ETHW after the potential chain split.

However, given the significant downside risk of ETHPOW, traders appear to be more comfortable holding ETH, enabling them to receive ETHW as well should a chain split occur.

History would suggest $ETH PoW forks are best sold. ETHW IOUs are now $30-33 (-67% from 1 month ago). I wouldn't sell the forks — in case it doesn't happen — and your $ETH is locked into the contract.

In addition, decreasing ETHW price may also suggest that traders are betting that an Ethereum chain split is becoming less likely.

In a report published Sept. 1, crypto investment firm Paradigm argues that the cost of one ETHW token should not be more than $18 after launch. That is nearly 90% below the token’s record high of $198, established on Aug. 9.

The firm cited backwardation, when futures trade lower than the spot prices, in the Ethereum Sept. 30 futures contracts as the reason behind its $18-price target for ETHPOW.

The report highlights that some exchanges, including FTX and Deribit, will measure the rates of their ETH futures/perpetual contracts by referencing Ethereum’s PoS version.

And since the ETH futures price now trades at an $18 discount compared to spot prices, the ETHPOW token could draw at least an $18 valuation upon the potential fork.

“We can infer how much the market estimates ETH PoW will be worth from simply looking at spot-future basis, since spot = POS + POW, while future is just POS,” the report explained, adding:

Grassroots Bitcoin, held at Bitcoin Park in Nashville, Tennessee, brought Bitcoin meetup organizers from all over the country to collaborate

“Through the rise and fall of Silk Road, through the relentless years of my incarceration … Bitcoin keeps